Generation-Z and Millennials are the future consumers of products and they will either make or break the titans of industries. This generation has had the influence of the internet since their birth and are well aware of modern technologies, especially in adapting newer ones. Emerging technologies have never been difficult for the Generation-Z and Millennial generations.

Technologies such as Virtual Reality, Augmented Reality and Telepresence, have been well adapted by users. With the recent implementation from Facebook of the Meta-verse. It’s only likely that this digital universe is about to boom and grow.

But, how do you tackle a generation that is so hyper in growth and unstable to make predictions of consumer purchasing attributes. Well, this is going to sound odd, but, memes are a constant within modern generations. By using popular memes such as Pepe the Frog (Sad Crying Frog), Success Baby, Distracted Boyfriend and etc. Teenagers and Young Adults stay connected. Especially, they’ve also been able to communicate this with their adults, such as parents, seniors at their workplaces and etc.

This source of communication within one-another has been used freely with no restrictions. Whether it be controversial or revolutionary, memes have become a part of the internet. So, being able to identify and use these templates should be resourceful, right?

Well, if it were that simple it would be too easy. In fact, most companies are recognized as cringeworthy and don’t appeal to modern generations. But, there are also companies such as WhiteClaw, that has made its recognition in the U.S. Alcohol market and is gaining a worldwide marketplace, due to its meme marketing campaign, that is not at all sponsored or driven by their marketing department.

So whats the secret? Why do some succeed and some fail in this strategy, well, there’s a secret sauce to how memes can be used. Especially in terms of the marketing psychology that you set for your audience in your templates.

We’ll take a look at some key aspects of how to implement Meme Marketing for your business to help grow.

The Important of Memes

The use of memes is prevalent in social media. Memes are often used in Facebook posts, Tweets, and Instagram posts by people to express their thoughts on something. By doing so, they are able to convey their message in a way that is more relatable and will make their followers more likely to share the post.

You can’t take a popular meme template and use it as a template to create a campaign for a your audience. If you’re going to use a meme, you need to know if it’s going to be successful or not. You need to know what your target audience’s interests are and what they’re likely to share and discuss.

Use a meme template that conveys the emotional experience your users would go through after trying your product or service. Whiteclaw was able to gain traction when users took it to social media to make fun of how Whiteclaw can change your mental state in a positive manner after their users have consumed it.

It’s important to research and use templates at the right given moment. At this current moment Reddit r/memes is one of the places to identify pioneering meme templates and find out what’s the best template to use for your product.

By using templates that are relevant and current, you can influence the growth of your product through a well placed meme campaign.

So far we’ve been talking about indirection, indirectly xD… And by that what i mean is that we’ve been highlighting the importance of how indirect your meme campaign should be.

Your audiences, shouldn’t even feel like this is a marketing campaign at all. And for that the meme should matter and make sense, if you were running a campaign with too many memes on it and being cringeworthy. Your audiences might not even take interest in your product at all and find you too desperate.

So, make sure to highlight the important of the joke behind the meme, without trying to sell your product directly with it.

Now, i’ve spoken of how untimed and unrelatable memes can actually work against your campaign and demote the emotional values that the consumers had on your product.

But, let’s take a look at a real example that took place for a global fastfood chain. You might have even heard of them, they’re called McDonalds, that’s right the global fastfood behemoth was ridiculed. For using the “Say No More Fam” Meme which basically pokes fun of bad haircuts, and put it on their UK brand for a tweet in 2018. Obviously the confusion from followers brought a lot of replies, but not the kind that a marketer would fancy. 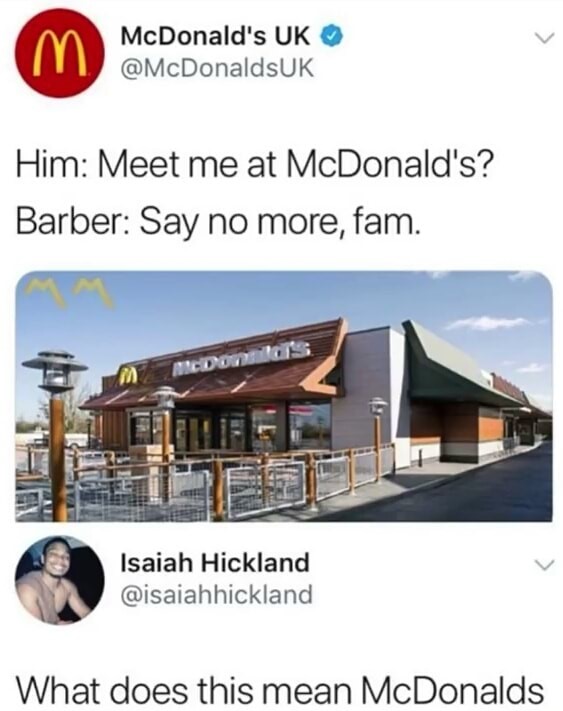 This campaign turned McDonalds into a laughing stock and was ridiculed as an old-timer trying to “be cool”. But, the fact is that the McDonalds UK Marketing Department, never understood the purpose of the template.

So, if there’s anything you need to take seriously about Meme Marketing, its how serious the meaning of a template can be.